I adore the King Arthur Flour recipe for raisin, rye and pecan bread!  The raisins give the bread a wonderful sweetness.  The mixture of rye and white flours gives a more wholesome flavor.
I make some changes to the recipe:
This bread was made several times before, as a freestanding loaf, and in my cast iron pot.  When a fellow seller at the Farmer's Market gave me some of his rye flour to try, I just had to make it into this bread.

It takes 2 days to make this bread, because a starter is made the night before.  The starter contains only 1/8 of a teaspoon of yeast, all purpose flour, and a small amount of water.  The result is a stiff dough, which is placed in a small oiled bowl.  The bowl is covered and left on the counter overnight.

I had planned to take a picture of the starter, twice, but forgot.  Sorry.  You'll just have to try making this wonderful bread!

The next morning, I mixed together the ingredients, except the raisins and pecans.  The dough rose for about an hour.  It was a bit sticky and puffy.  It didn't double in size, which the recipe said was normal.  I used my mixer to add the nuts and raisins.  Some extra flour was added--the recipe called for kneading in the nuts and raisins on a floured surface.  Therefore, this was the time to add extra flour!

The first time, a freestanding loaf was made on my stone.  I wish that I had put the dough in a bowl to rise, so it wouldn't spread out so much: 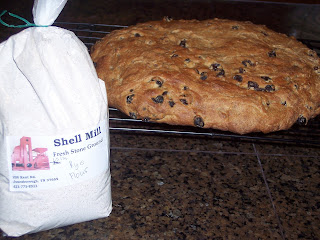 The second time, the dough rose and baked in a 9" baking pan: 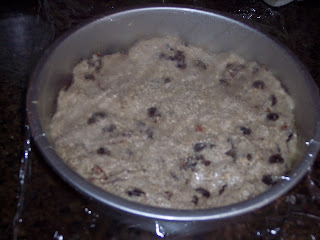 This made a nice round loaf.  However, I'd like a bit more rustic look. 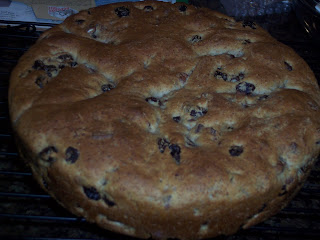 The second bread was a gift for a friend, who did a favor for me.  It was hard to resist, as the aroma was wafting out of the oven.
My friend just called and said the bread was fabulous--most of the bread never made it home (it was shared with a friend).
Thanks for stopping by.  I hope you will leave a comment, and post what you baked.
Judy
Posted by Judy's Bakery & Test Kitchen at 5:49 PM 1 comment:

For this baking project, I decided to try Peter Rheinhart's "Multigrain Bread Extraordinaire."  The HB5 bread assignments this time just didn't interest me.

Peter, in his book, "The Bread Baker's Apprentice," said that people really liked this bread.  Since I'd like to add a multigrain sandwich bread to my Farmer's Market menu, I thought I'd try this one. 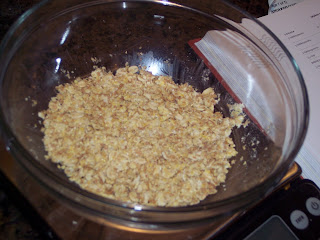 The dough starts with a "soaker."  I don't know the difference between a soaker and a starter; they are probably the same thing.  This soaker is a combination of coarse cornmeal, wheat bran, rolled oats, and water.  It's a good opportunity to use the freshly-ground cornmeal from the farmer's market the other day.  The bowl is covered with plastic wrap, and left on the counter overnight so the enzymes can start working. 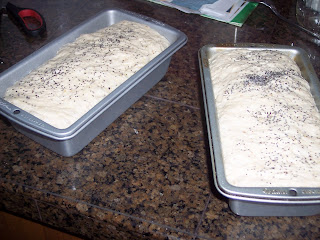 One recipe change was to use only water, instead of the suggested water and milk.  Peter's recipe notes said that makes the loaf chewier, and no crust carmelization.  The finished loaf was definitely chewy! 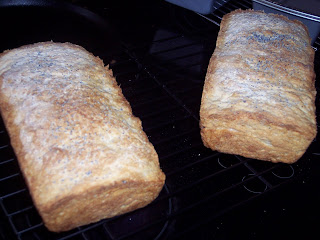 I was hoping that the loaves would come out taller.  I guess that's why a single two pound loaf was suggested in the recipe. 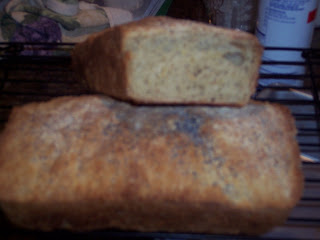 We really enjoyed this bread.  Very tasty.  Even though it's called a multigrain bread, however, it seemed to contain mostly bread flour.  I might experiment with the recipe--to remove some of the white flour and add additional whole grain flours.
Thanks for stopping by and visiting!  I look forward to hearing your comments and seeing your breads.
Judy﻿
Posted by Judy's Bakery & Test Kitchen at 2:33 PM 2 comments: