Baking at My Friends' House, Without Any of My Equipment!

Recently, I stayed at the home of good friends, while making a trip back to Los Angeles.  I also stayed with them about 6 months ago, and asked if I could use their kitchen then.  Baking relieves stress for me and gives me the feeling of doing something special for friends. I was happy that they enjoyed what I did so much!


This time, one of the daughters quickly requested "Can you make some of that chocolate chip challah again?"  Loving the fact that she liked it so much, I put that on my list!  Everyone seems to love what I bake or cook, and I love an appreciative audience!

Baking in their kitchen calls for creativity on my part.  I have to figure out what's available, and "make do."  I brought my Weight Watcher food scale (this one only goes up to 2 pounds) on trips.

However, I didn't have dough buckets, oven thermometer, digital thermometer, multiple baking sheets, dutch oven, tea towels, or a good set of measuring spoons/cups.  Ok, there are measuring spoons, but the writing rubbed off--I guessed which one is a teaspoon.  Next time, I might write the measurement with a Sharpie.

Their refrigerator space is at a premium, and we quickly loaded it up with goodies for the week.

But it was so much fun!

I started off by making raisin challah.  In the AB in 5 book, the recipe says to roll out the dough, sprinkle with raisins , roll the dough into a log....


Handwise tip--A faster way is to add the raisins to the flour when making the dough.  The raisins become coated with the flour and mix into the dough evenly.


The next morning, I quickly made the braid, added egg wash, and sprinkled sugar on top.  Because I'm used to the Eastern Time Zone, I was awake and in the kitchen long before anyone else was awake. They are used to Pacific Time Zone, so I had plenty of time. They woke up to freshly baked bread!


Since their daughter wanted something with chocolate chips, I decided next to make glazed rolls especially for her.  In the AB5 book, the recipe says to roll out the dough, sprinkle with chips and sugar, and roll the dough into a log.  I did that, and then cut off 2 inch slices of dough for the rolls.  They were baked in a 9 inch cake pan.

As mentioned before, refrigerator space is at a premium at this house.  So I decided that my next bread with be the Jim Lahey Walnut and Raisin Bread--no fridge space needed.  This is one of my favorite breads, and I'm glad I brought the recipe.


This dough mixed quickly, and sat on the counter overnight.  No refrigeration, just time, is needed

My friend didn't have the 5qt dutch oven that is recommended for this bread.  She had some shiny-new pyrex casseroles, which were about 3qt.  I took a risk that I could divide up the dough and make 2 loaves from each batch.


This is tricky because the recipe calls for the wet dough to be plopped onto a tea towel for the last rise.  There weren't any tea towels.  I had one "sort of tea towel" and one cotton placemat.  Hey, it worked out!


I wasn't sure the pyrex would hold up in a 450 degree oven, so I began by baking the first loaves longer at 400 degrees.  The pyrex were so new looking, I was afraid to use them in a hot oven. 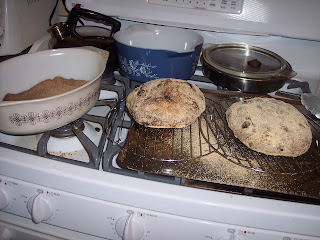 The loaves were just great, even without the digital thermometer to test if they were done.  In fact, baking this way may have answered why my loaves were damp in my dutch oven at home.  It's possible that my 3.5qt dutch oven is too small for a full batch.  There's plenty of room, but Jim Lahey recommends a 4.5 to 5 qt size.  Maybe it needs room to steam?
I also brought sourdough baguettes from home:

They were part of a dinner consisting of Mexican Lasagne (layers of tortillas, corn, refried beans, salsa, and olives), salad, and Spanish rice.  It was fun sitting down for a meal with my friends.
By the way, my friend says that the "magic eraser" removed any stains from the bread baking.  But it also erased the memories...
I'm including a video of my favorite baking buddy while baking in their home.  Molly never left my side while in the kitchen. What an optimist, since I never dropped any crumbs! We had to shoo her away from the hot oven.  She's still a puppy and kept sniffing at the oven door when I opened it.
We had a great time, and I have been invited back again.  Yaay!
Only, next time, I am putting together a "baker's travel kit!"  I'll take one of those small roll-type toiletry bags, and add various baking items--small scale, measuring spoons, flat digital baking thermometer, tea towels, and any special ingredients.  I'm not sure about measuring cups, because they aren't very flat.
What would you put in a travel baking/cooking kit?  This may be a good topic for discussion, and I hope you will leave a comment including that below.
Thanks for stopping by, and visit with me again soon!
Judy
Posted by Judy's Bakery & Test Kitchen at 1:55 PM 3 comments:

I'm just "lovin' bakin' in my dutch oven."  So, instead of the assigned HB5 breads, I thought I'd make another dutch oven bread this week.  I could make another Jim Lahey bread, but how about one of the "Artisan Breads in 5 Minutes" breads?


There are still a number of  AB5 breads that I haven't tried.  This would be a good time to try the European Peasant Bread, with the twist of doing it in a covered casserole.

I made a half batch of the dough, with a few changes:
At first, I thought I'd do a one pound loaf.  However, since I wanted the bread to rise in a basket, I decided to use the two pounds of dough.  Not too small, not too big, just right!


The basket was sprayed and floured before adding the dough, to keep the dough from sticking.  I put the basket into a plastic bag and it was placed into the warmed microwave to rise.  I'm not sure how long I let the dough rise--just until the dough filled the basket nicely.  Meanwhile, the dutch oven heated in a 450 degree oven.


After the dutch oven heated for about 30 minutes, I removed it with my favorite Ove-Gloves mitts.  The dough plopped into the pot when I turned the basket of dough over.  Shaking the pot slightly helped shape the bread better in the pot.  I could see the straw basket pattern in the dough!  I was nervous about slashing the dough in such a hot pot, so that wasn't done.


Here's a picture of the bread, when I took the lid off.  The bread baked, uncovered, for about 20 minutes more. 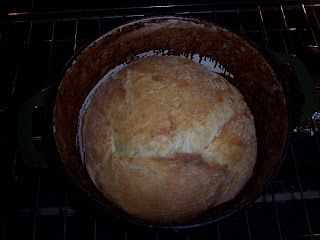 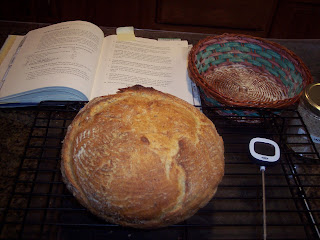 This is a picture of the finished European Peasant Bread. You can see some of the pattern of the basket on the bread.

The texture of this bread was really good.  I know I baked it longer to make sure I didn't get a wet center, but I wonder if the sifting helped.  It might help, since the vital wheat gluten is mixed throughout.


Yummy, yummy bread!   The center was not damp, either!  Glad I listened to my instincts.

It reminded us of the deli rye bread, but without the caraway seeds.  Next time, I might add the seeds. We ate the bread for dinner with orange chicken and millet pilaf on Friday night.  There was only a little left by the time Sunday rolled around (a sign of a good bread in my house), but it was just enough for salami sandwiches--a quick Sunday dinner.


Thanks for stopping by to visit! Come back soon, I'll be baking again often. I hope you will leave a comment below. I read every comment, and really appreciate your feedback.
Posted by Judy's Bakery & Test Kitchen at 5:11 PM 12 comments: